We do need quantum theory to describe many physical phenomena, but, at the same time, there are many other phenomena where the classical theory of probability works pretty well. Indeed, we hardly see quantum interference on a daily basis. Why? The answer is decoherence. The addition of probability amplitudes, rather than probabilities, applies to physical systems which are completely isolated. However, it is almost impossible to isolate a complex quantum system, such as a quantum computer, from the rest of the world: there will always be spurious interactions with the environment (such as heat transfer), and when we add amplitudes, we have to take into account not only different configurations of the physical system at hand, but also different configurations of the environment.

For example, consider an isolated system composed of a quantum computer and its environment. The computer is prepared in some input state and generates output . Let us look at the following two scenarios: 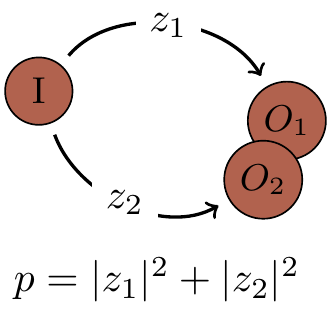 We shall derive this formula later on, and you will see that quantifies the degree of distinguishability between and . The more the environment knows about which path was taken, the less interference we see, and the less we can leverage the computational power of quantum effects.

Decoherence is chiefly responsible for our classical description of the world: without interference terms we may as well add probabilities instead of amplitudes (thus recovering the additivity axiom). While decoherence is a serious impediment to building quantum computers, depriving us of the power of quantum interference, it is not all doom and gloom: there are clever ways around decoherence, such as quantum error correction and fault-tolerant methods, both of which we will meet later.