Let’s briefly return to the problem considered in Section 4.9, where we are given a system and told that it is in either state or , with equal probability, but that these two vectors are not orthogonal. The goal is to find a measurement that maximises the probability of correctly identifying which state the system is in. Before solving this problem using the language of distances, let us repeat the geometric idea that we used previously.

Draw two vectors, and , separated by some angle . We want to find some orthonormal vectors and that specify the optimal projective measurement. First, note that any projections on the subspace orthogonal to the plane spanned by and will reveal no information about the identity of the state, so we know that we will want our orthonormal vectors to lie in the span of and . Now, since and are both equally likely to occur, we want to place and symmetrically around them, as shown in Figure 11.2 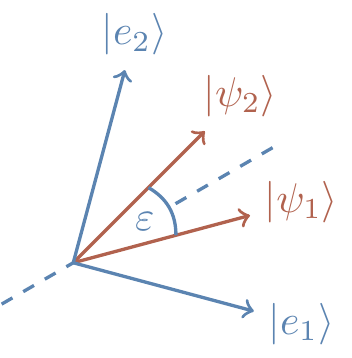 Figure 11.2: Recall Section 4.9 — the optimal measurement to distinguish between the two equally likely non-orthogonal signal states and is described by the two orthogonal vectors and placed symmetrically around them.

The probability of correctly distinguishing the two states is which reduces, with our schema, to where the last equality holds whenever is “small enough”. But, happily, we can be much more precise than this!

Let’s start by rephrasing the problem in terms of density operators. We are sent one of two quantum states, either or , with equal probability. You might notice that we’re now labelling our states with instead of . This is simply to help guide our intuition: we are being sent one bit of information, a or a ; the only complication is that this is happening in such a way that we cannot perfectly distinguish between them (since we are receiving non-orthogonal quantum states). We want to choose two orthogonal projectors and , so outcome is interpreted as a and outcome as a . The probability of correctly detecting which state was sent is, as always, the probability that was sent and outcome was observed, plus the probability that was sent and outcome was observed. In symbols, where the last equality follows from the fact that .

By applying Hölder’s inequality196, this tells us that

Of course, the whole story of quantum state distinguishability has much more to it than we have covered here. In Exercise 11.10.9 we ask about the case where the two states and are sent with non-equal probabilities and , respectively. The more general scenario, where some quantum source emits states with respective probabilities , turns out to be incredibly difficult — we do not know an optimal discrimination strategy, except for in a few special cases.