Such a two-state machine that we have just described in abstract terms is usually realised as a controlled evolution of a two-state system, called a quantum bit, or qubit for short.41 For example, the state may be chosen to be the lowest energy state of an atom (the ground state), and state a higher energy state (the excited state). Pulses of light of the appropriate frequency, duration, and intensity can take the atom back and forth between the basis states and (implementing logical ).

Some other pulses (say, half the duration or intensity) will take the atom into states that have no classical analogue. Such states are called coherent superpositions of and , and represent a qubit in state with some amplitude and in state with some other amplitude . This is conveniently represented by a state vector

By Born’s rule, we know that and cannot be arbitrary complex numbers: they must satisfy . This lets us draw the state vector “geometrically”, using the fact that the locus of vectors of magnitude equal to describes a circle: 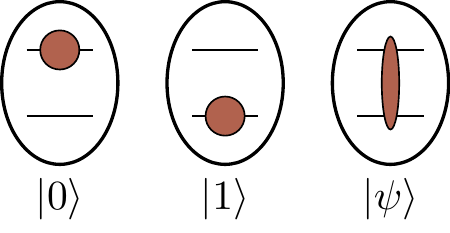 But recall that amplitudes are complex numbers, and so and cannot really be drawn as -dimensional real vectors on a flat screen or piece of paper; the picture above provides good intuition, but to be fully accurate we would need to draw it in four-dimensional space (or at least on some three-dimensional paper).

A qubit is a quantum system in which the Boolean states and are represented by a prescribed pair of normalised and mutually orthogonal quantum states labelled by and . The two states form a so-called computational (or standard) basis, and so any other state of an isolated qubit can be written as a coherent superposition for some and such that .

In practice, a qubit is typically a microscopic system, such as an atom, a nuclear spin, or a polarised photon.