We have already mentioned (Section 4.3) that non-orthogonal states cannot be reliably distinguished, and now we can make this statement more precise. Suppose Alice sends Bob a message by choosing one of the two non-orthogonal states and , where both are equally likely to be chosen. What is the probability that Bob will decode the message correctly, and what is the best (i.e. the one that maximises this probability) choice of measurement?82 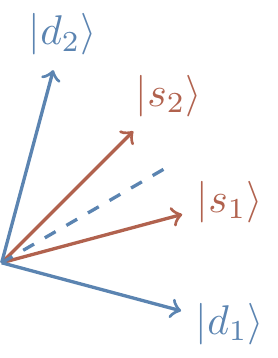 Figure 4.2: The optimal measurement to distinguish between the two equally likely non-orthogonal signal states and is described by the two orthogonal vectors and placed symmetrically around the signal states.

So suppose Bob’s measurement is described by projectors and , chosen such that “ implies , and implies ”. Then Let us look at the operator that appears in the last expression. This operator acts on the subspace spanned by and ; it is Hermitian; the sum of its two (real) eigenvalues is zero (whence ). Let us write as , where are the two orthonormal eigenstates of , and are the corresponding eigenvalues.

Now we write where we have dropped the non-negative term . In fact, it is easy to see that we will maximise the expression above by choosing and . The probability of success is then bounded by . All we have to do now is to find the positive eigenvalue for the operator .

We can do this, of course, by solving the characteristic equation for a matrix representation of , but, since we are practising using the trace identities, we can also notice that , and then evaluate the trace of . We use the trace identities and obtain which gives . Bringing it all together we have the final expression:

We can parametrise , where is then the angle between and .

This allows us to express our findings in a clearer way: given two equally likely states, and , such that , the probability of correctly identifying the state by a projective measurement is bounded by83 and the optimal measurement that achieves this bound is determined by the eigenvectors of (try to visualise these eigenvectors).

We will return to this same problem later on, in Section 11.8, where we will use a different, less ad-hoc, approach, working in the more general setting of so-called density operators.