A projector is any Hermitian () operator which is idempotent (). The rank of is given by . In the Dirac notation, if is a unit vector, then is a rank-one projector on the subspace spanned by , and it acts on any vector via . 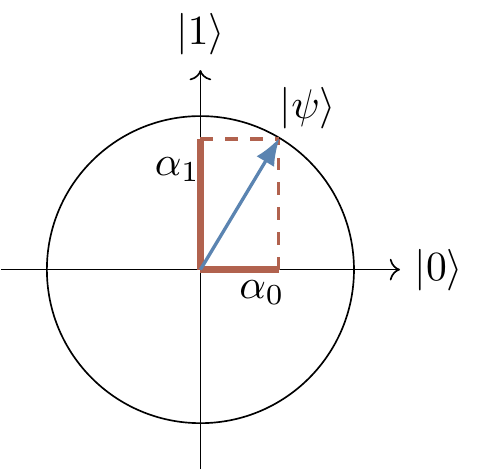 However, if we want to emphasise the role of the measurement, then we can include it explicitly in the diagram as a special quantum gate, e.g. as

or, in an alternative notation, as

The subtleties (both mathematical and philosophical) of quantum collapse are still very much active topics of research, and we could spend an entire book discussing them. There are a lot of other sources where you can read about such things — here is a very short list to start:

A measurement is a physical process and can be explained without any “collapse”, but it is usually a complicated process in which one complex system (a measuring apparatus or an observer) interacts and gets correlated with a physical system being measured. We will discuss this more later on, but for now let us accept a “collapse” as a convenient mathematical shortcut, and describe it in terms of projectors rather than unitary operators.

For our purposes, the idea of “quantum collapse” is simply a way of black boxing the irreversible interaction between a quantum system and its surrounding classical environment.

On a practical level, it means that we describe measurement and observation with projectors instead of unitary operators.